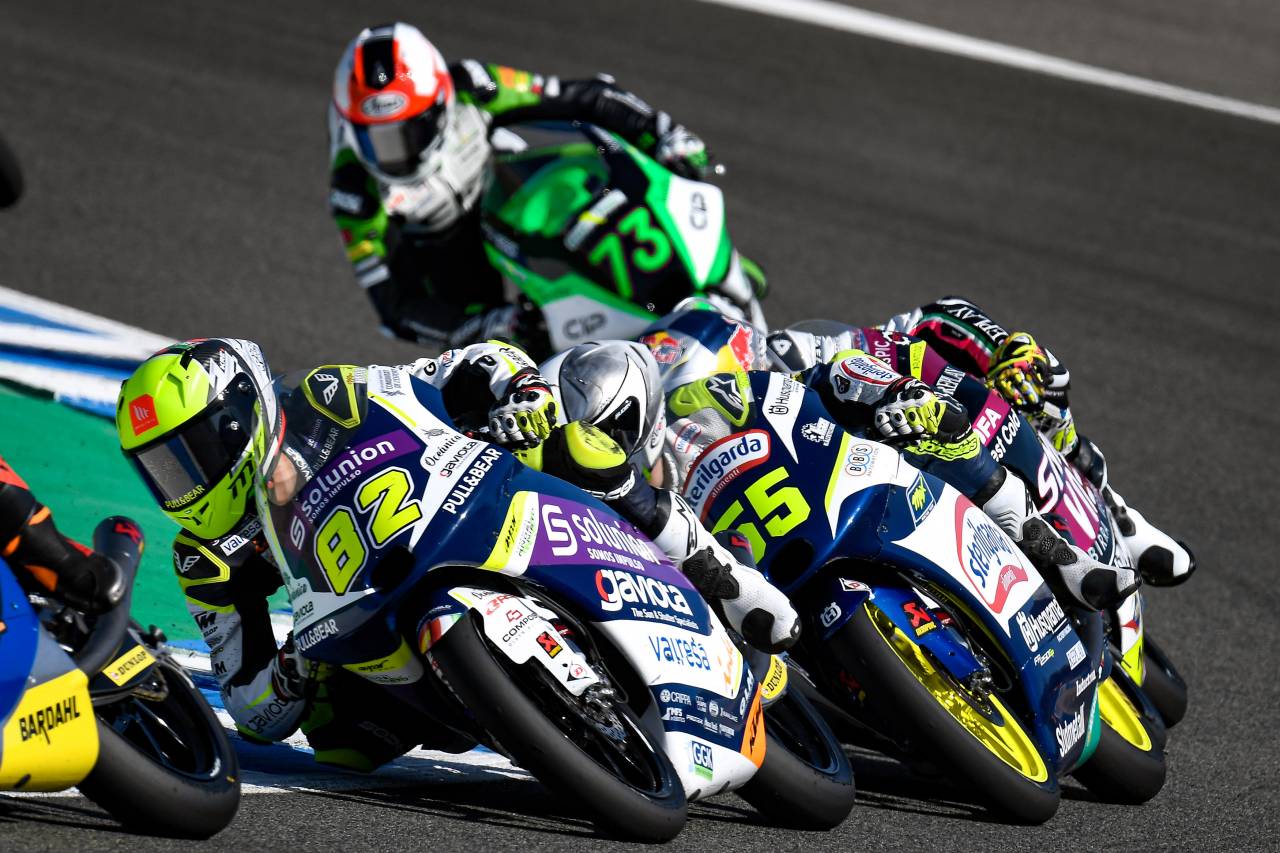 Arenas retains the lead despite the crash in Jerez

The Solunion Aspar Team rider was riding in the leading group when he hit the ground, in a race in which Stefano Nepa was fourteenth

Tatsuki Suzuki was able to turn pole position into a victory for the first time this year. The Japanese rider has won the Andalucía Grand Prix from British John McPhee, second, and Italian Celestino Vietti, third. Two of the key moments of the race were the crashes of the Solunion Aspar Team rider Albert Arenas, leader of the Moto3 World Championship, and Ai Ogura, second before today's race. The leading group, which has had up to twelve members, has been losing riders until the final group of six, who have entered the finish line less than a second apart from each other. After Vietti, and off the podium, Darryn Binder and the Argentine Gabri Rodrigo have been fourth and fifth. With these results, Albert Arenas continues to lead the general standings with 50 points, six more than Tatsuki Suzuki and ten more than John McPhee.

Solunion Aspar Team rider Albert Arenas retains the Moto3 lead despite the crash he suffered today during the Andalucía Grand Prix. The Spanish rider was competing with the front group, after starting from sixth position, and had options to repeat the victory a week after his win at the Jerez - Ángel Nieto circuit. However, with just over seven laps to go, Arenas has crashed in one of the fastest corners of the circuit, spraining his left ankle in the fall. The Solunion Aspar Team rider will return to action in Brno on the weekend of August, 9. Next to him will be his teammate, Stefano Nepa, who has started the second consecutive grand prix on the Andalusian track from the eighth row of the grid and throughout the race has competed with the second group. Nepa has been gradually gaining ground until finishing again in the points, in fourteenth position, with a pace similar to that of the leading group.

14th Stefano Nepa (+7.729): “It has been two very good and positive weekends; we are happy with the work we have done. Today was a great race, even though we finish the fourteenth, but I have work hard: my time was eight seconds faster than last week's race. It was an incredible pace; we were all on the edge. The bad thing is that I started from behind and I lost a bit of time in the first laps, but then I kept up with a pace similar to that of the group in front. We will continue working to improve in the QP and in the FP3. We have the potential and speed to get it right. I want to thank the team, the family and the sponsors and tell them that we will be back in force in Brno.”

Albert Arenas (crash): “I am physically well, hurt for not finishing the job and wanting to recover my ankle soon. The crash has been very spectacular, but these are things that happen, it happened to us in the third race. We knew that in Moto3 a DNF is inevitable, although we always try to be constant and consistent. In the race I decided to stay in the group and wait until the end, to see if I could attack or not, and I noticed that the bike was sliding, but I decided to stay there. However, there has come a point where I have lost both wheels and gone to the ground. I have tried to save the crash, but it has been impossible. Mentally I am one hundred percent, we maintain the lead, but it doesn't mean much either, because there are still a lot of races ahead. We have spent the first joker, it is necessary to maintain the same line of work that we had until now.”