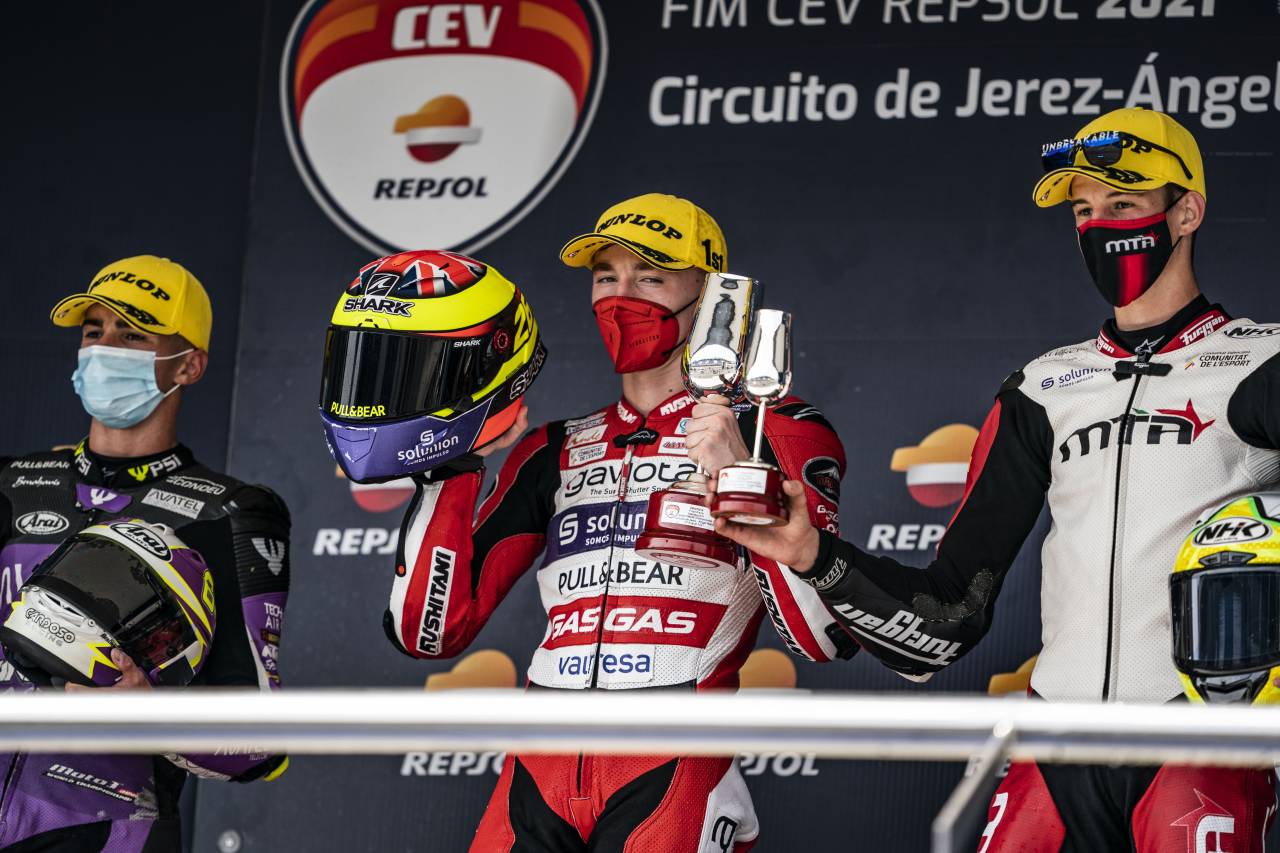 Dani Holgado continues as leader of the Moto3 Junior World Championship, with a 42-points lead

Aspar Team Junior has won again in the Moto3 Junior World Championship, this time with British rider Scott Ogden, in the first Jerez race. There, Dani Holgado has finished on podium and, after also being fifth in the other race, he will travel to Misano with a 42-points lead over his rivals.

Scott Ogden has achieved his first victory in the Moto3 Junior World Championship with Aspar Team Junior in a masterful race, in which he has led the last four laps and in which, with a few meters to go, he was fourth. The British rider was able to find his place in the last corner and, taking the inside line, he was able to beat the rest of his rivals. In this race, Dani Holgado has finished fifth and David Alonso has finished eighth. With these results, Holgado's difference at the lead dropped to 51 points and made it difficult to confirm the title in the second race of the day.

In this second race, Holgado was unable to go further than third, just behind his two main rivals, David Muñoz and Iván Ortolá. Despite getting his seventh podium of the season, out of nine possible, Holgado has seen his difference in front of the standings reduced a little more and leaves Jerez with 42 points of advantage. His teammate David Alonso finished sixth, improving the eighth position in the morning, while Scott Ogden could not finish the weekend with a good result after the victory and crashed. With these results, Ogden climbs up to fourth overall while David Alonso remains in sixth.

The Aspar Team Junior European Talent Cup riders were unable to demonstrate their speed and consistency in the two races of the weekend. Dodó Boggio has crashed in both races, being involved in incidents with other riders, and despite the fact that he started from the fifth row of the grid, he has not been able to translate it into good results. Teammate Pol Solá has recovered positions, from 25th place on the grid, to finishing 19th in both races. The next FIM CEV Repsol competition weekend will be on September 19, at the San Marino Grand Prix, where only the Moto3 Junior World Championship riders will compete. Previously, the Aspar Team Junior riders will close the Red Bull Rookies Cup season, seven days earlier, at Motorland Aragón.

Daniel Holgado (5th / 3rd): “We are being very consistent; we are going to continue in this line and we will try to get the title at Misano. I'm happy with how the weekend went. We had to yet take the step forward in the last laps, but at least we have drawn good conclusions. In the second race, the temperature was very high and made everything difficult, but we have got the best possible performance and we have returned to the podium for the seventh time this year.”

Scott Ogden (VICTORY / DNF): “It's incredible, I'm very happy with this victory, which would not have been possible without all the support from my team. It was a crazy race, but little by little I managed to place myself first. I have focused on setting my pace, without thinking about whether they would pass me or not. I wanted to try, and I managed to stay ahead. I came to the last corner in fourth position, but I knew that if I braked late, I could get the inside line. In the second race I had a bad start, but was recovering. I braked very hard, and I hit the ground. We could have fought for the podium, but it wasn’t meant to be. We will fight again in Misano. I am happy with the result of my teammate Dani Holgado, he is close to the title.”