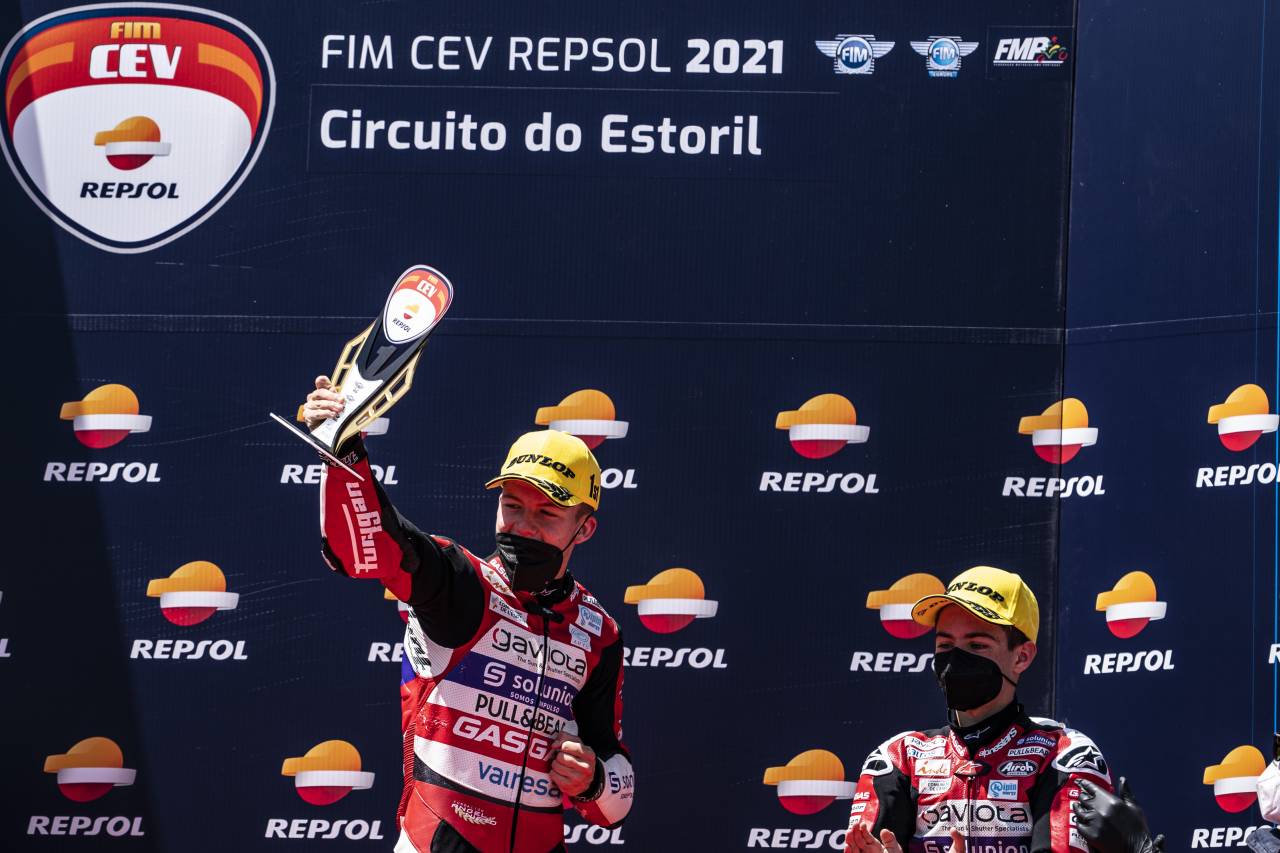 Dani Holgado wins the first round of the year of the Moto3 Junior World Championship, with his teammate David Alonso third

The Gaviota GASGAS Aspar Team Junior has started the year with the victory of Dani Holgado in the Moto3 Junior World Championship and the third position of his teammate David Alonso in his debut in the category. Holgado dominated the first race of the season practically from start to finish and managed to beat a group of up to seven riders. David Alonso, current European Talent Cup champiob, has come from behind, recovering up to three seconds of difference with the leader, to get his first podium in the Moto3 Junior World Championship on the day of his fifteenth birthday. Briton Scott Ogden, who started from fourteenth position, was unable to complete a good first lap and had to climb from nineteenth place finally finish in tenth his first race with the team.

The young riders of the Gaviota Aspar Team Junior Dodó Boggio and Pol Solá faced this weekend in Portugal the first two races of the European Talent Cup. The two achieved the tenth position in their respective qualifying practice groups and started from the seventh row of the grid both races. In the first race, Boggio managed to climb to thirteenth position, just ahead of his teammate Solá. Boggio was unable to complete a great weekend due to a crash in race two, when he was near the top 10. His teammate Pol Solá did not stop fighting until the end of the race to score a point by finishing fifteenth. The next FIM CEV round for the Gaviota Aspar Team Junior riders will be the weekend of May 9, at the Circuit Ricardo Tormo. Before that, Holgado, Alonso and Ogden will compete in Jerez in the second round of the Red Bull Rookies Cup, a competition led by Alonso after his two wins in Portimao.

WINNER Daniel Holgado: ““I am very happy with this victory; it is a joy to end with victory a weekend in which we have worked so hard with the team. It has been impressive from start to finish. We have done a great job with the set-up of the bike and I can only thank my technical team, because without them it would not have been possible, and my family, for all the support.”

3rd David Alonso (+1.014): “I didn't expect to get on the podium in my first Moto3 race. We knew that it was not going to be easy and in qualifying it did not go well for us, but we were able to solve the problems in the warm-up session. Lap by lap, with good rhythm, I was able to reduce the distance with the leading group until I caught up with them and placed myself second. I suffered a lot, on the last lap I was very tired and with worn tyres, but I am very satisfied.”

10th Scott Ogden (+13.920): “The first laps were bad, because I had some incidents with other riders and I lost several positions, but as my pace was good, little by little I managed to recover positions. I hope to keep improving during the season and to get good results in the next races."

Pol Solá (14th in the first race / 15th in the second): “We have finished the first two races in the points and in Valencia we will go out on the track aware that we can be ahead and do even better. Both races have been positive, we came from an injury and we take home points. I was not able to fight with the group due to a mistake in the first race and latera another rider braked earlier than expected in the second race, but we will continue to fight in the coming weekends.”

Edoardo Boggio (12+1 in the first race / crash in the second): “The first race was beautiful. The start was a bit bad and a touch in the third corner made me lose contact with the group. We were riding in the same times as the leading group, and a thirteenth position is not a bad start. In the second I was able to ride with the front group, but I fell when I touched another rider. I know we can be fighting for front positions, I will try again in Valencia.”