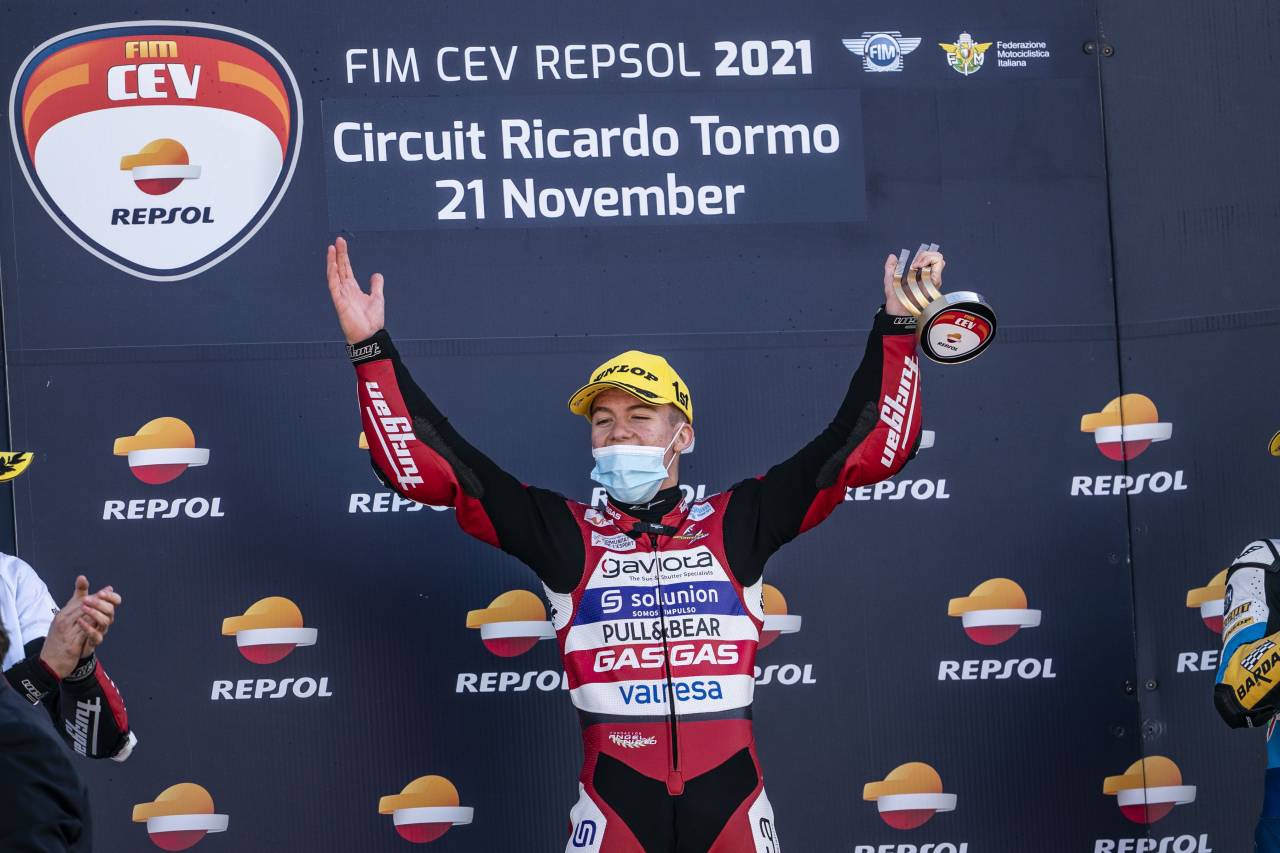 The Spanish rider takes the title in the first race today and wins the second, while Scott Ogden, who took pole position, finishes 4th and 5th and David Alonso, 2nd and 9th.

The last round of the FIM CEV season held today in Valencia crowned Dani Holgado as FIM Moto3 Junior World Champion in the first race, with David Alonso finishing second and Scott Ogden fourth. In the second race of the day, Holgado took a narrow victory, Ogden was fifth and Alonso ninth. This title means the first one achieved by GASGAS in a Road Racing World Championship.

Rain earlier in the day left the track in difficult conditions for the first race of the day, but Dani Holgado was able to complete a smart race, taking only the necessary risks to finish ninth and secure the FIM Moto3 Junior World Championship title. After Raúl Fernández (2018) and Izan Guevara (2020), Holgado today became the third Aspar Team Junior rider to win this title in the last 4 years. In the second race, the Alicante rider beat Iván Ortolá by 22 thousandths of a second to take his fifth victory of the year (eighth podium).

His teammates in the GASGAS Aspar Team Junior also had a good weekend. Scott Ogden took pole position yesterday by setting the fastest time in both practice sessions and he and David Alonso battled with the leading riders in both races. In the end, Ogden finished fourth and fifth and Alonso was second and ninth. With these results, the British rider finished sixth overall and the Colombian seventh.

The Aspar Team Junior riders in the European Talent Cup had mixed fortunes. While Edoardo Boggio was unable to finish the first race or start the second due to discomfort in his knee injured in the last crash at Jerez, Pol Solá managed to score points in the first race, finishing 13th, and came up just short in the second, 16th. In the overall standings, the Italian finished 21st and the Spanish 28th.

Dani Holgado (9th / 1st / Champion): "I want to thank everyone who came to see me today, because I felt the support and strength that I lacked in the last laps. Also to all my team, they are amazing and I will miss them a lot. I hope we meet again in the future. I also want to congratulate David Muñoz and Iván Ortolá, because they have done a great championship and have been great rivals. Thanks to them I have been able to improve as a driver and also as a person, working hard day after day. Congratulations to them too. In the second race, I was able to go out more aggressive and ready to fight for the victory and finally we were able to take another win".

Scott Ogden (4th / 5th): "I'm very happy with how the weekend went. It went well from day one and getting pole position yesterday was very special for me and my team. In the end we scored a fourth and a fifth, which a priori is not bad, but starting from pole position, you would always prefer to win both races. I'm a bit disappointed not to have finished on the podium but overall I'm very happy and happy that Dani has become champion. I want to thank the whole team because it has been very special to be with them, they have made me improve as a rider and they are the reason why next year I will move up to the World Championship".

David Alonso (2nd / 9th): "This last weekend of the year has been the best. In the test we did before the race we already made a big step forward and this weekend, since Thursday I was able to be fast in all conditions. I had a hard crash on Friday but I was able to complete a good Saturday and both races today. I finished second and ninth but in both races I enjoyed it because I can ride the way I know how and we made a jump in quality. I'm very happy to finish the year like this, we have a very good base and I'm looking forward to start the preseason".

Edoardo Boggio (DNF / DNS): "It was a good weekend. We didn't know if we would be able to go out on track after the knee operation, but finally we could, but only on Saturday, because today, Sunday, I couldn't finish the first race. Now it's time to prepare for next year".

Pol Solá (13th / 16th): "We started the weekend well, being quite fast both in the dry and in the wet. On Saturday we managed to qualify well for Sunday. In the first race, I had a good start, but it was difficult to follow those in front and I was fighting with other riders for a good part of the race. In the second race, I couldn't overtake many riders at the beginning and I was left fighting in the group behind".